Slaney Foods and one of our farmers enjoyed another success at this year’s M&S Farming for the Future Awards. Following on from Alan Mooney winning this competition in 2015, another Slaney producer Ger Rochford from Co. Wexford reached this year’s final for the Outstanding Producer Award – a proud day for both the processor and the farmer supplier.  “It is great to see farmers of the highest standard being rewarded for their efforts.” Denis Brennan commented.

Ger was selected as a finalist in this year’s awards because of his constant hard work and attention to detail to improve on farm efficiency. Another aspect of Ger’s farm enterprise that the judges found outstanding was his ability to produce 98% of his livestock to the M&S specifications. 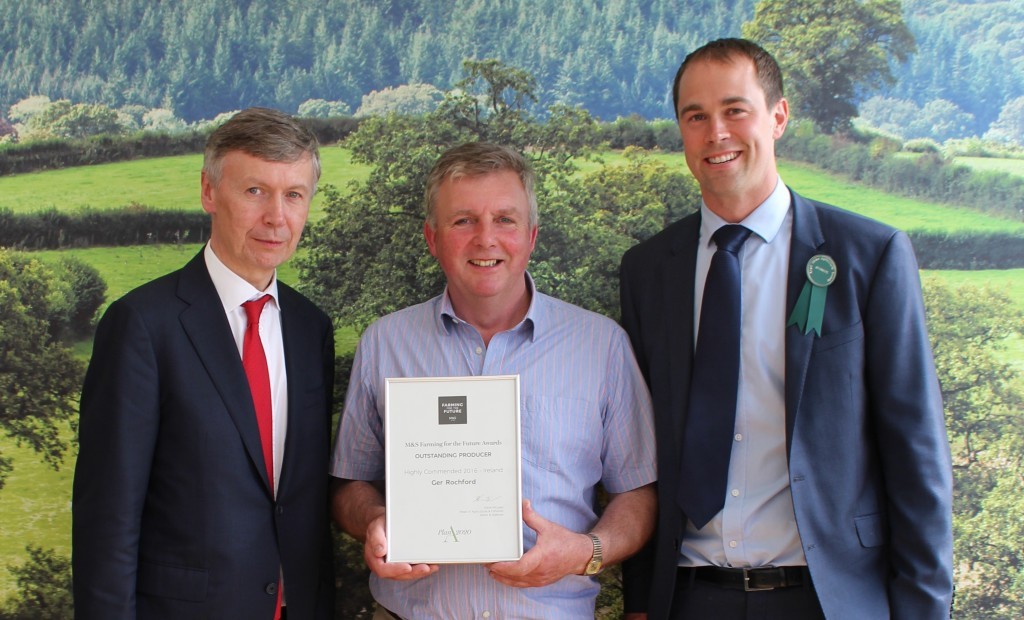 Ger operates a large contracting business covering all agricultural activities as well as 100 suckler cows finishing all progeny as well as finishing 70 store cattle each year. There is land for grass, grass silage, barley wholecrop and sugar beet allotted to the beef enterprise which runs alongside cereal production enterprise. Ger farms jointly with his brother and employing 2 full time staff and 3 more part time workers.

Constant attention to detail is evident throughout the farm. Annual blood tests are carried out on his entire suckler herd prior to housing for Autumn calving. This ensures that all necessary minerals are fed to cows in their total mixed ration (TMR) which maximises output and also cuts out the use of unnecessary minerals reducing farm costs.

Ger has adopted a leader follower system for his entire farm to improve thrive and grass growth whilst reducing finishing age. Finishing cattle are given first preference to grass followed by the suckler cows to clean out the paddock system Ger has built on his farm.

Animal performance is also monitored by constant weighing of animals to ensure that they are in a constant growth stage and never suffer any growth checks or store periods. These actions are clear to see in Ger’s animals performance.  The average slaughter age for steers is 24 months averaging 385kg with his heifers achieving weights of 355 kg at 22 months of age.

Constant awareness and embracing new technologies are the characteristics of leaders in our industry. This typifies Ger Rochford’s approach. Ger throughout his farming career has done just this. His never ending strides to increase efficiency and animal performance exemplarily. Hard work, increasing recording, extra analysis and capital expenditure are never seen as obstacles to improvement.

Quite the opposite as Ger himself says “attention to detail is the key to making great strides in farming”. It is rare to come across such enthusiasm for the less exciting parts of beef farming such as silage and soil analysis as well as grazing regimes. Slaney Foods in its position as one of Irelands leading beef processors feel it is imperative that we reward the people that have taken the interest and adapted their farming methods to the science behind farming. It is for this reason that Slaney Foods as Ger Rochford’s beef processor would like to congratulate Ger and his family on this achievement.